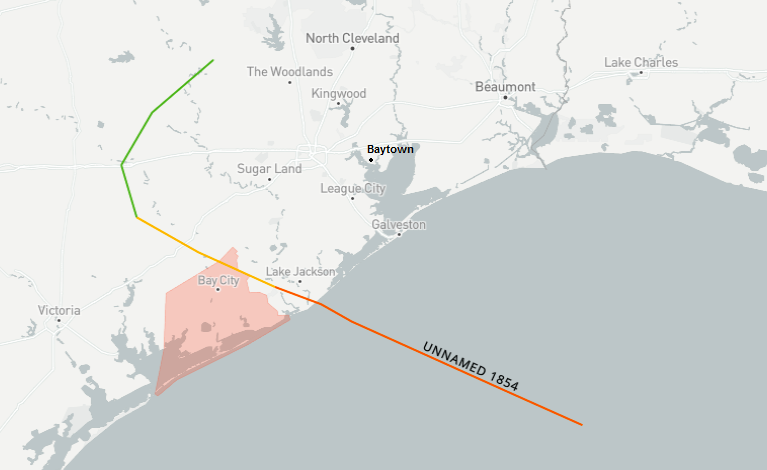 The path of the 1854 Matagorda Hurricane from the National Hurricane Center website.

The path of the 1854 Matagorda Hurricane from the National Hurricane Center website.

Our close call with Hurricane Laura last week got me thinking about other hurricanes which have visited us over the years. Before 1953 hurricanes were not given names. They were referred to by location such as the “Great Indianola Hurricane of 1875” which I wrote about last year, or maybe by some event such as “Racer’s Storm” which in September 1837 battered the British sloop-of-war HMS Racer off the coast of Yucatan, breaking off all the masts and blowing the ship flat, twice. They jury-rigged a mast and limped into port, having lost all the cannons, sails, stores, and three people. The “Secret Storm” hit Baytown in 1943, destroying much of the refinery and putting it out of commission for a couple of weeks, interrupting production of 100 octane gasoline for warplanes, butyl rubber, and TNT for bombs. Usually ships at sea provided radio warning of approaching storms but due to German submarine activity off the Gulf Coast, ships hesitated to break radio silence. Except for a few reports in local papers, wartime censors did not allow widespread publication or warning of the storm but due to public outcry in the aftermath of the hurricane, that policy was changed.

The Matagorda Hurricane of 1854 could have formed further out in the Gulf but was first detected about 100 miles southeast of Galveston. It made landfall on September 18, 1854 near Lake Jackson and today we would call it a Category 2 hurricane. Letters from Matagorda paint a picture of widespread destruction. Many cattle, horses and sheep were drowned and all the buildings in that area except for three houses were blown down. Several people were killed when their houses fell down on them. Almost all the crops within fifty miles of the gulf were destroyed. Many sailboats were left aground and most of those which weren’t sank in the storm. After landfall, the hurricane took an easterly path and for three days continued to pummel our area.

Your vote is crucial for freedom

Most important election of lifetime

Do the right thing

ExxonMobil managers: Together, we are stronger