Casey’s brick yard, ca 1910, from the collection of Kenny Wright. 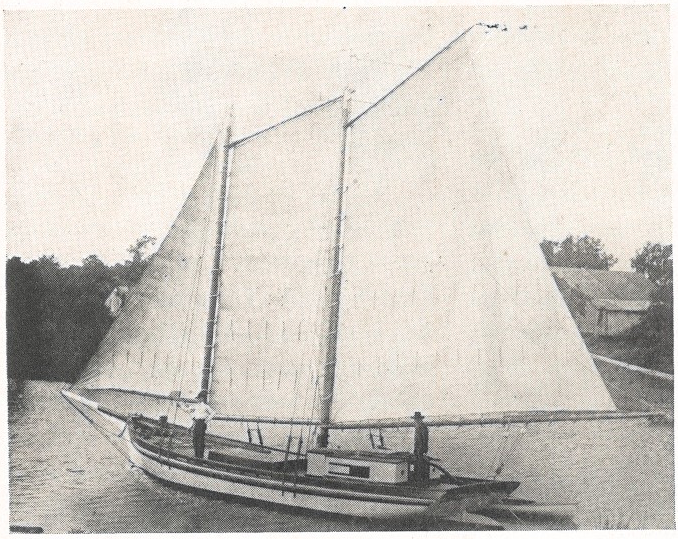 Casey’s brick yard, ca 1910, from the collection of Kenny Wright.

In the 19th century Cedar Bayou bricks were made by hand, one brick at a time.

According to a series of articles written for the Baytown Sun by Nelson A. Martin who worked at Mike Casey’s brickyard as a small boy, four men and two boys could produce 5,000 bricks per day. The first step was to dig the clay and mix it with top-soil to soak in water for 24 hours. Then it would be thoroughly mixed in what was called a mud-mill. This device had a long boom which protruded from the mill and was powered by a mule walking in endless circles. There are two of them in the picture. After it was thoroughly mixed, the mud would be taken by wheelbarrow to the molding table. The molder would form a handful of mud, called a pone, roll it in sand to keep it from sticking in the mold the same way a baker rolls dough on a floured surface, and then fill the three-brick wooden molds with the clay.

You can see the boys holding these molds in the picture. When the three cavities were filled he used a “striking stick” to scrape across the top of the mold to level and smooth the brick. Then the boys, called off-bearers, dumped the bricks onto a board and carried them to the drying shed. This shed protected the brick from sun and rain which would cause cracks until they were dry. After the brick were dry enough they were wheeled into the kiln by wheelbarrow. The brick setter was a skilled man who knew exactly how to stack the bricks to allow even firing in the kiln. The kiln at the Casey yard held about 30,000 bricks and when it was full was fired with wood. It took about 150 cords of wood over eight days to fire a kiln. After the bricks were fired, they were ready to be shipped to market.

Brickyards did not operate during the winter because freezing would cause the bricks to crack but they used the down time to cut timber for the following summer’s brick production. In 1890 a late March freeze ruined 300,000 bricks in several Cedar Bayou yards before they could be fired.

Early on, steamboats were used in the brick trade. In October 1871 a storm sank the stern-wheel steamboat C. R. Hall off Cedar Point where it went down with all hands and a full load of brick. J. P. Davis’ steamboat Beardstown, also in the brick trade, was wrecked during the 1875 hurricane but the crew survived. After the Beardstown went down the preferred method of getting bricks to Galveston was by sailboat, and many of the yards had their own boat.

These two mast schooners ranged from 31 to 66 feet in length and were shoal draft boats with a maximum depth of four feet which could carry up to 40,000 bricks depending on the size of the vessel. Over the years there were about 20 of these boats in the brick trade which were collectively known in Galveston newspapers as the Cedar Bayou Brick Fleet.

Since these boats had no motors they needed help getting up and down the bayou so W. D. Haden built the “Cedar Bayou Tow Path.” This path paralleling the bayou and the bridges built over the numerous small gulleys lining the bayou was maintained by the Chambers County Commissioners. Schooners would tie a rope high up the mast and a boy on a mule would tow the boat to the mouth of the bayou where the sails could be unfurled to continue the trip. They had to tie it high to keep the rope from getting snagged on brush. W. D. Haden’s descendants are in the same business today operating a Houston-based tugboat company. In the 19880s and 1890s “Marine Notes,” a column published in the Galveston Daily News, listed names of boats, the captain, and their cargo. Notices of Cedar Bayou brick arrivals appear several times a week, but no other sources are mentioned.

By 1910, 7 million to 10 million bricks were being shipped from the yards at Cedar Bayou to Galveston and Houston each year. The Clays of Texas, published in 1908, named brickyards owned by W. B. Haden, E. G. Smith, Casey & Gillette, Donnelly & Morgan, and M. K. Casey in operation that year on Cedar Bayou. An article in the July 3, 1983 Baytown Sun mentioned even more yards; Mike Casey brickyard, Fayle brickyard, MacLean yard, McGee yard, and Davis yard. Some of these were undoubtedly the same yards under different owners. Although Thomas Wright died in 1893 his brickyard continued in operation until about 1904. The last Cedar Bayou brickyard to advertise in Galveston was W.D. Haden’s yard in 1909.

According to Martin, “Cedar Bayou bricks cannot be identified in the landmark structures of Galveston because it was not the practice of early brick yards to stamp trademarks into their bricks.” Cedar Bayou brick was used for local projects as well. When the two-story Cedar Bayou school house was built in 1911, the brick came from Mike Casey’s yard.

Baytown resident Chuck Chandler is retired from the Exxon Refinery and serves as Vice President of Baytown Historical Preservation Association. Contact him at chuck.chandler@baytownhistory.org