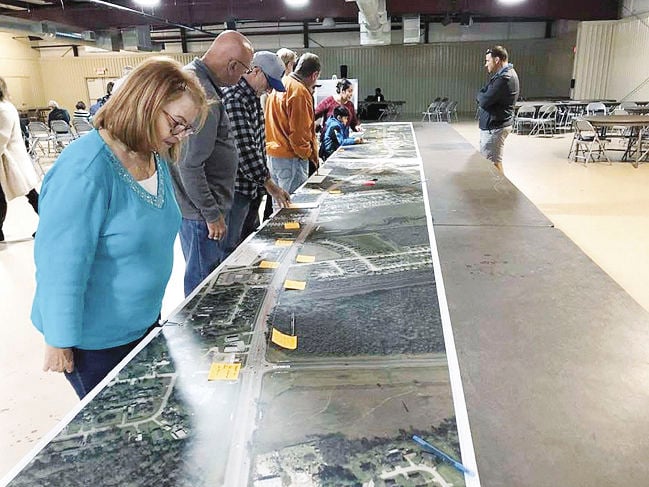 Linda Schrader examines a map of the proposed Highway 146 upgrades. Many citizens complained that the changes did not address most important needs, including more signal lights, a reduced speed limit and the elimination of Highway 99 tolls to divert 18-wheelers from Highway 146. 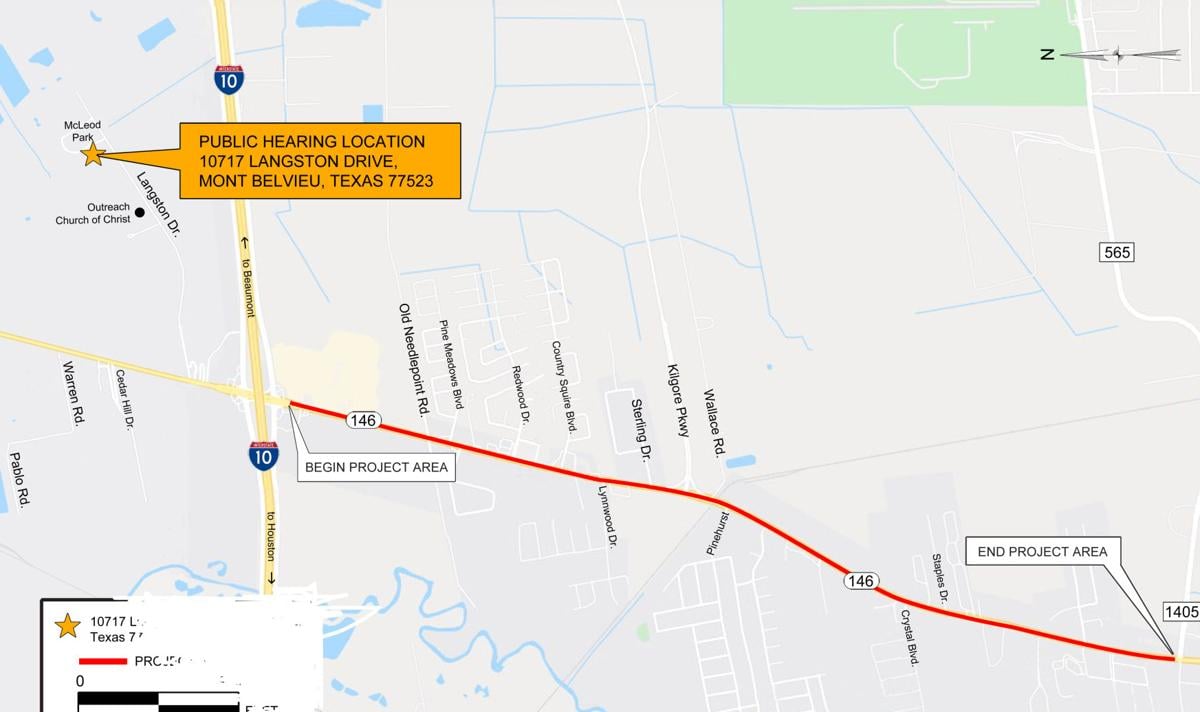 The targeted area for improvements is 146 from Interstate10 south to FM 1405. The existing roadway consists of two 12-foot wide lanes with an eight-foot wide shoulders, separated by a 16-foot wide two-way center turn lane.

Linda Schrader examines a map of the proposed Highway 146 upgrades. Many citizens complained that the changes did not address most important needs, including more signal lights, a reduced speed limit and the elimination of Highway 99 tolls to divert 18-wheelers from Highway 146.

The targeted area for improvements is 146 from Interstate10 south to FM 1405. The existing roadway consists of two 12-foot wide lanes with an eight-foot wide shoulders, separated by a 16-foot wide two-way center turn lane.

A public hearing, held in Mont Belvieu, was designed to present the planned improvements, and get public comments of plans to enhance safety by implementing access management improvements.

The targeted area for improvements is 146 from Interstate10 south to FM 1405. The existing roadway consists of two 12-foot wide lanes with an eight-foot wide shoulder in each direction, separated by a 16-foot wide two-way center turn lane.

The plan involves building raised medians to replace the two-way center turn lanes, and adding “Michigan U-turns” at certain areas eliminating left-turn lanes at these spots. This would result in drivers going straight or turning right, and then making a U-turn at a median. The plan also calls for a right-turn lane to be constructed at the Devinwood Drive and Cedar Bluff Drive intersection to make accessing Dr. Johnny Clark Jr. Elementary safer and more convenient. In addition, a sidewalk would also be constructed from the Interstate 10 eastbound frontage road south to Chambers Town Center.

Chambers County Pct. 4 Commissioner Billy Combs said the number of people in attendance should demonstrate how important making changes to Highway 146 is to residents.

“People are not only concerned about safety, but mobility,” Combs said. “But there are several things left off from the HGAC recommendations submitted back in 2018. The right turn lanes have been eliminated, and some signals have been left off. One at Old Needlepoint Road was eliminated. We need to add some traffic lights, and not just so people can get in and out of subdivisions.”

Kirk Russell, a Pinehurst homeowners association representative, said the proposed changes do nothing to help residents trapped in subdivisions along the highway. Russell said he would like to see the speed limit lowered to 45 mph and for the area to have a greater law enforcement presence.

“One major intersection is El Chaco Drive,” he said. “We still have people going through the lights. We would like to see more signal lights at Crystal Boulevard, Tanglewide subdivision, Lynnwood Drive, and Old Needlepoint Road and possibly include Pine Meadows as well. Also, put in dedicated right-turn lanes for subdivisions and businesses. That would get people out of the main traffic line and reduce the crashes.”

“Installing a light there would allow for time intervals along that whole corridor to provide for our buses and community members to enter the roadway safely,” Walterscheid said.

“They are not wide or long enough for a school bus to go around,” he said.

Brenda Medina, the Pine Meadows homeowners association president, said her development is still waiting on a traffic light. She relayed a story when, in 2013, her son came home crying saying his bus almost got hit by an 18-wheeler. Medina said she worked with then-Pct. 4 Commissioner Rusty Senac, Goose Creek CISD and the City of Baytown.

“We got the speed limit down to 50, but we still do not have a light,” she said.

Casey Palous, Hunters Chase subdivision homeowners association vice president and firefighter, said he was not impressed with the plans.

“This proposal does nothing to reduce traffic as you suggest it does,” Palous said. “You will have people making U-turns on both sides. A majority of us go south to go to work. It adds to our commute time tenfold, and it does nothing for safety. What you are effectively doing is taking your problem and putting it on the people that live there and planning for neighborhoods that do not exist yet. What about the people who live here now?”

Mont Belvieu City Manager Nathan Watkins expressed dismay at not having the city at the hearing.

“The master plan for State Highway 146 was adopted by city council in 2018,” Watkins said. “We see the function and mobility of the entirety of Highway 146 as critical infrastructure that directly impacts the economic success of our region. It is unfortunate that the City of Mont Belvieu was not included in discussions regarding the prioritizing of improvements, and we are disappointed that only projects south of I-10 are slated to move forward.”

Despite the negativity directed at the plan, state highway officials said they are to listen to residents’ concerns. Any additional comments must be received by Dec. 20 to be a part of the official hearing record.

Any environmental documentation or studies, maps showing the project location and design, tentative construction schedules, and other information regarding the project are on file and available for inspection Monday through Friday between the hours of 8 a.m. and 5 p.m. at the TxDOT Beaumont District Office, 8350 Interstate 10. To schedule an appointment, call 409-898-5745.

Submit comments via email to bmtprojects@txdot.gov by Dec. 20.

The only way this expansion can truly serve this area is to have an elevated road OVER I-1o heading north. This will allow people to get out of town during emergencies, otherwise everything is plugged up at I-10. Those traveling north could fly over old Mont Belvieu and head straight for Dayton without stopping. The two major issues here are evacuation and watershed. If adding lanes increases congestion at I-10, what has been accomplished? I propose an elevated road that dumps out past the domed church on the north side of I-10.

Why is the biggest issue for home owners in this area not addressed? What is being done about the 146 bridge a cedar bayou? More subdivisions + bigger roads = more concrete. For us people that are established with homes in that area means we will flood again except instead of 6' or 8' of water in the house it will be 10' or 12'. Allison the water touched bottom of bridge. Harvey water went over bridge. 146 Bridge needs to be raised and widen to relieve the additional water that is expected to pass through there thanks to the overcrowding of this area.

3/2 M Home, to be moved, perfect for deer lease