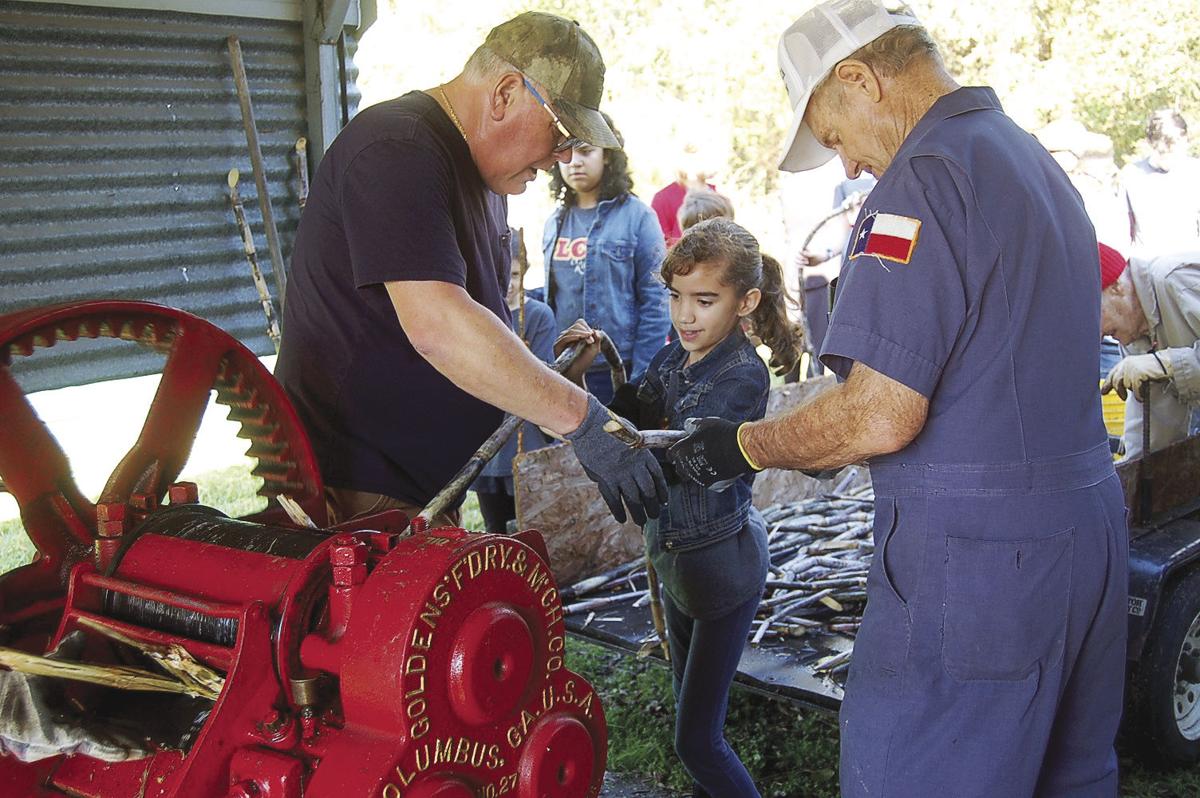 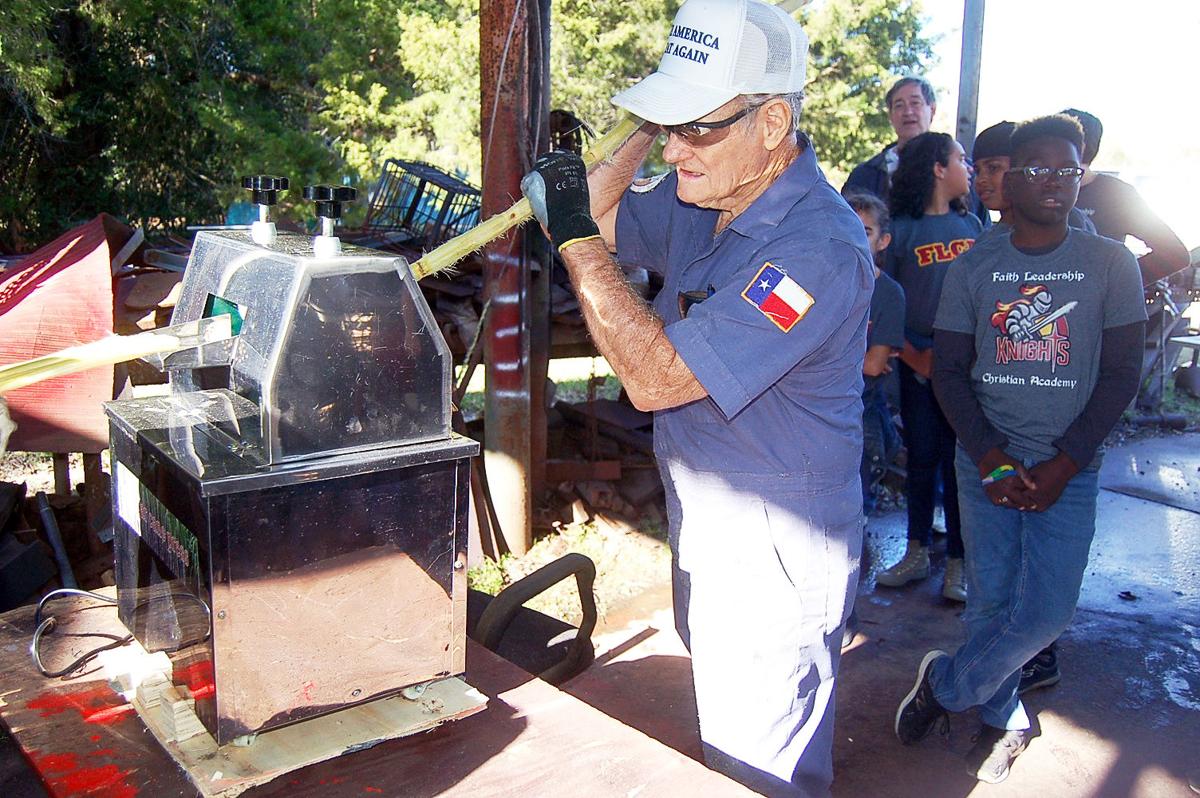 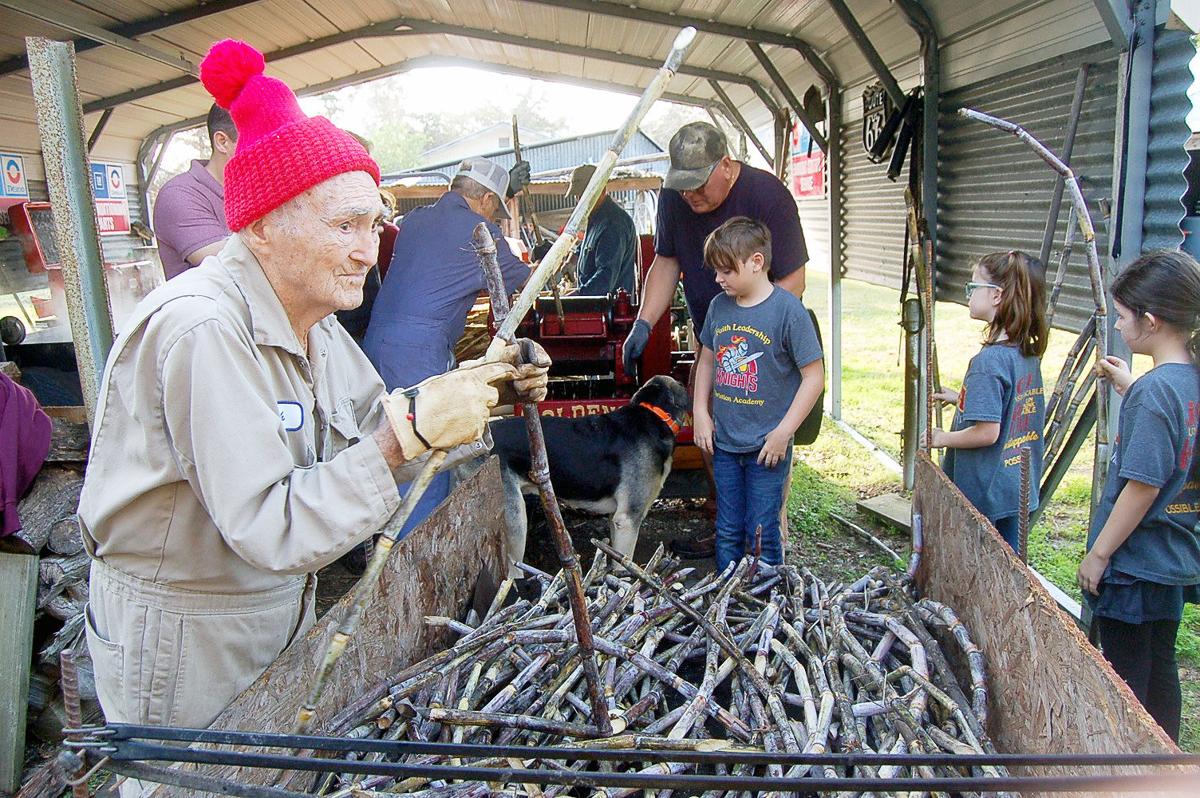 A group of Faith Leadership Christian Academy students gained a first-hand lesson in making syrup as Lonnie Fisher and company marked the end of an era.

Fisher has operated a cane mill for the past 10 years. Citing age and the work involved, the Cove resident has sold his mill. Friday marked the final time he woke up early and joined his volunteers to operate his trusty century-old Golden Model Mill at his 10 acres of land in Chambers County where he grows sugar cane.

“We (wife Judy) and me are getting near 80,” Fisher said. “We are getting older. We will miss the whole thing. It is a lost art and nobody knows how to do this.”

There have been a number of people that have helped make syrup since Fisher made his first batch on Halloween Day in 2009. Rich Skinner, Larry Skinner, Sonny West, Charles Enloe, Tracy Andrus, Fred Skinner and many others. Joining Fisher for the last run was Rick Skinner, Tom Tull, Ron Lewis and Robert Gann.

All Fisher’s bottles of syrup have on them is the words “Cane Syrup, Cove, Texas.”

Tull has volunteered for the past three years, learning about it during men’s fellowship at Old River Baptist Church. He doesn’t mind cutting cane and enjoys the cooking process.

“It’s never been about the syrup,” Tull said. “It’s about the folks. And Ms. Judy takes care of us and makes the best biscuits.”

Rick Skinner recalled the years of telling tall tales on the farm and agreed the most important aspect was visiting with friends.

“The first time it was Lonnie, my son Larry and me, old Exxon employees,” Skinner said.

The whole set up is a testament to Fisher’s ingenuity. The mill looks bought fresh off the floor over 100 years ago. It replaced his first machine, a Chattanooga 44.

“I called the company (Foundry Machine Co.) and told them I had one,” he said. “They told me I needed to keep it if it was in good shape. And they didn’t have any spare parts.”

The sugar-water liquid was drawn from the mill and heated in a process to remove the water and create the syrup. Someone manned the furnace removing wax that boiled to the top.

The Faith Leadership students, who refer to Fisher as Mr. Honey, took turns feeding the mill with cane as part of a learning process.

“The kids see something they have never seen before,” Fisher said. “It is a field trip for the kids and they think this is the greatest field trip there is.”

Although Fisher is giving up his mill, he does have a small press and will continue to make syrup on a smaller level. The students were able to drink a sample of the sugarcane juice fresh off the press. To strip the bark off the cane, Fisher made a machine for the purpose Thursday afternoon.

“I saw a video on YouTube and came out here and made it in one afternoon,” he said.

Skinner, who himself is 93, noted the end of the era but figured there would be enough to keep them busy.

“We will still make homemade sausage,” he said.

Some eras die, others live on.