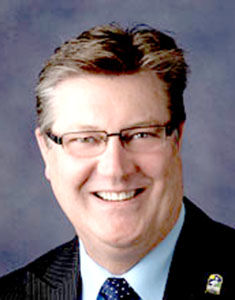 Councilman Robert Hoskins says his vision for running for the District 128 seat is to represent all of the communities within the district’s boundaries.

“There are quite a few communities involved here, so we need to be up in Austin and have a voice up there,” Hoskins said. “We have a lot of industry growth in this area, a lot of transportation needs here, and we need to really be addressing those issues and pushing our state agencies to help us out with some of the needs we have here.”

Hoskins, who announced his candidacy for the seat Monday, said he plans to file either today or tomorrow officially.

“I am not running against Rep. Briscoe Cain. I am running for the seat of District 128,” Hoskins said. “He wanted to take his own avenue, and I am not going to challenge that. A person in any capacity, whether that is elected or something to do with the state, they are sticking their neck out, and I respect that.”

“I’m honored to have the endorsement of conservatives from Governor Greg Abbott, Republicans precinct chairs, and small business owners throughout this district,” Cain said. “My consistent record of voting for property tax reform, to secure our borders, and properly funding our teachers and schools, is in line with the values of our community.”

“One big need is the bridge over here on Interstate-10,” he said. “And the highway is a problem within itself. If I-10 is plugged up, the people shift over to Highway 90, and then FM 2100 gets plugged up through Highlands and on up to Crosby. Undoubtedly, we will have a wreck out there, and everything is shifted over there to the Fred Hartman Bridge on Highway 146 and then Highway 225, and it gets plugged up. We really need to push (the Texas Department of Transportation) to clear some of this stuff up by getting us thoroughfares here.”

Hoskins said one thing really close to his heart is public education.

“It has been successful for many years, but some laws were set up in Texas that are destined to cause the public school system to fail,” Hoskins said. “So, we need to work up there in Austin to remove some of these restrictions, and make laws that stand behind the teachers in the classroom.”

School finance is another area Hoskins intends to address.

“It is almost where we need it to be,” Hoskins said. “There needs to be some massaging on the bill that went through this last year. The public school system can be a success if we give it the right funding and put the right teachers in the classrooms and where they can properly control their classrooms. If we have a public school system that is not performing, then we need to deal with that.”

Hoskins said he plans to remain on council for the time being.

“I still have that responsibility,” he said. “I was voted in to take care of that job, but the timing came up right where I can stay on council until the end of this term.

Hoskins said while still serving on council, he wants to focus on issues such as increasing the homestead exemption for those 65 and older.

“We want to change that,” Hoskins said. “That returns tax money to those 65 and older immediately. I want to stay on to help the rest of council push that through.”

Hoskins has received some endorsements from area mayors and community leaders. One is former Baytown Mayor Stephen DonCarlos.

“I worked with Bob for a number of years on council,” DonCarlos said. “I found him to be a very conscientious, hard-working council member who did a good job representing his district. He was always prepared for council meetings, and, frankly, I thought he always had a good grasp of the issues and made good sound decisions. I think he will make a great state representative for our city.”

“Political affiliation aside, I look at the actions and efforts of those individuals in making a world a better place to live,” O’Brien said. “In observing who has been in the room many times during my short tenure in Baytown for the last seven years during that effort, it was not hard to acknowledge Bob Hoskins as a leader for what is right, fair and equitable across the board. I am convinced that his passion will demand results in his service to the residents of Texas House District 128.”

[whistling]Bob Hoskins is a great person. He serves Baytown well. I would support him in political office if it wasn't this particular time. Briscoe Cain is a powerhouse in the Texas House of Representatives. He knows how to maneuver the political maze to get things done. He is well liked among his colleagues and a bulldog for our Districts concerns. I think it is not good for the Republican Party to battle each other at this time. We need to focus on keeping Texas RED, not fighting among ourselves. I think Baytown needs Briscoe Cain for a little longer.

Who’s going to win the Super Bowl: Chiefs or 49ers?

Drop animals from our menus

The Chambers County Commissioner’s Court is seeking Proposals for qualified