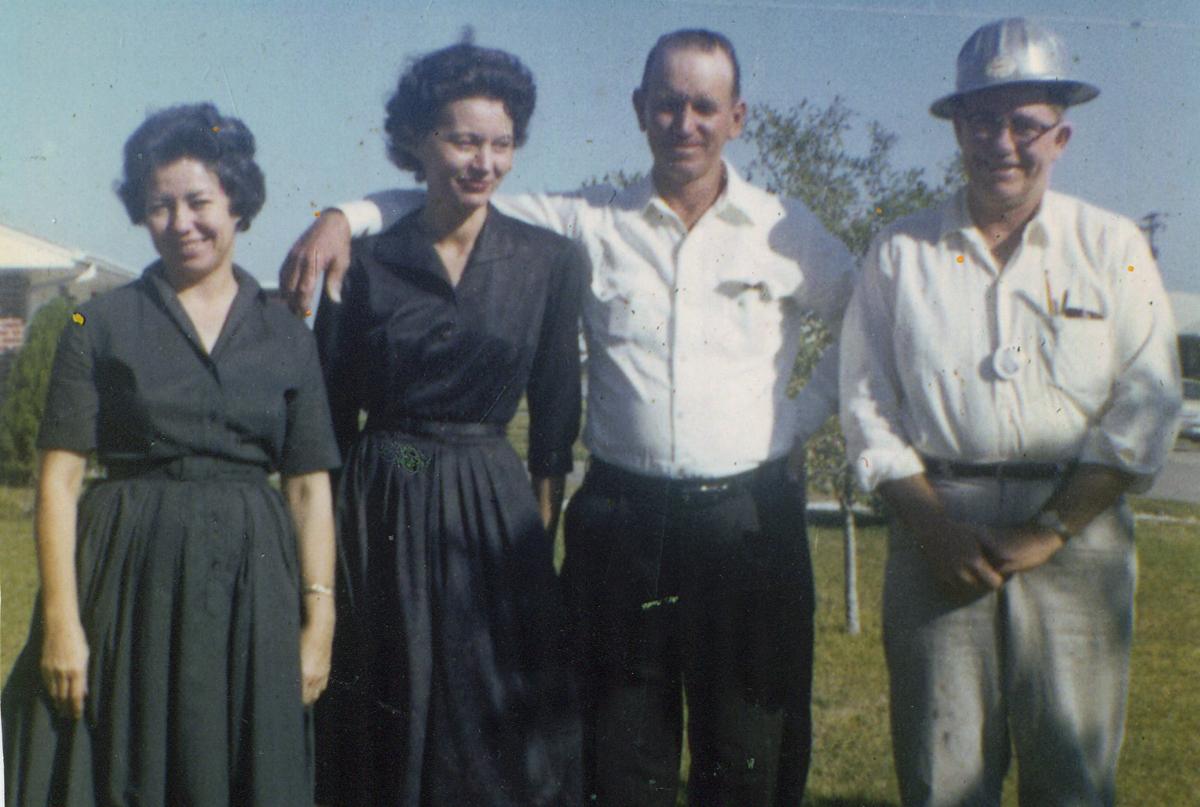 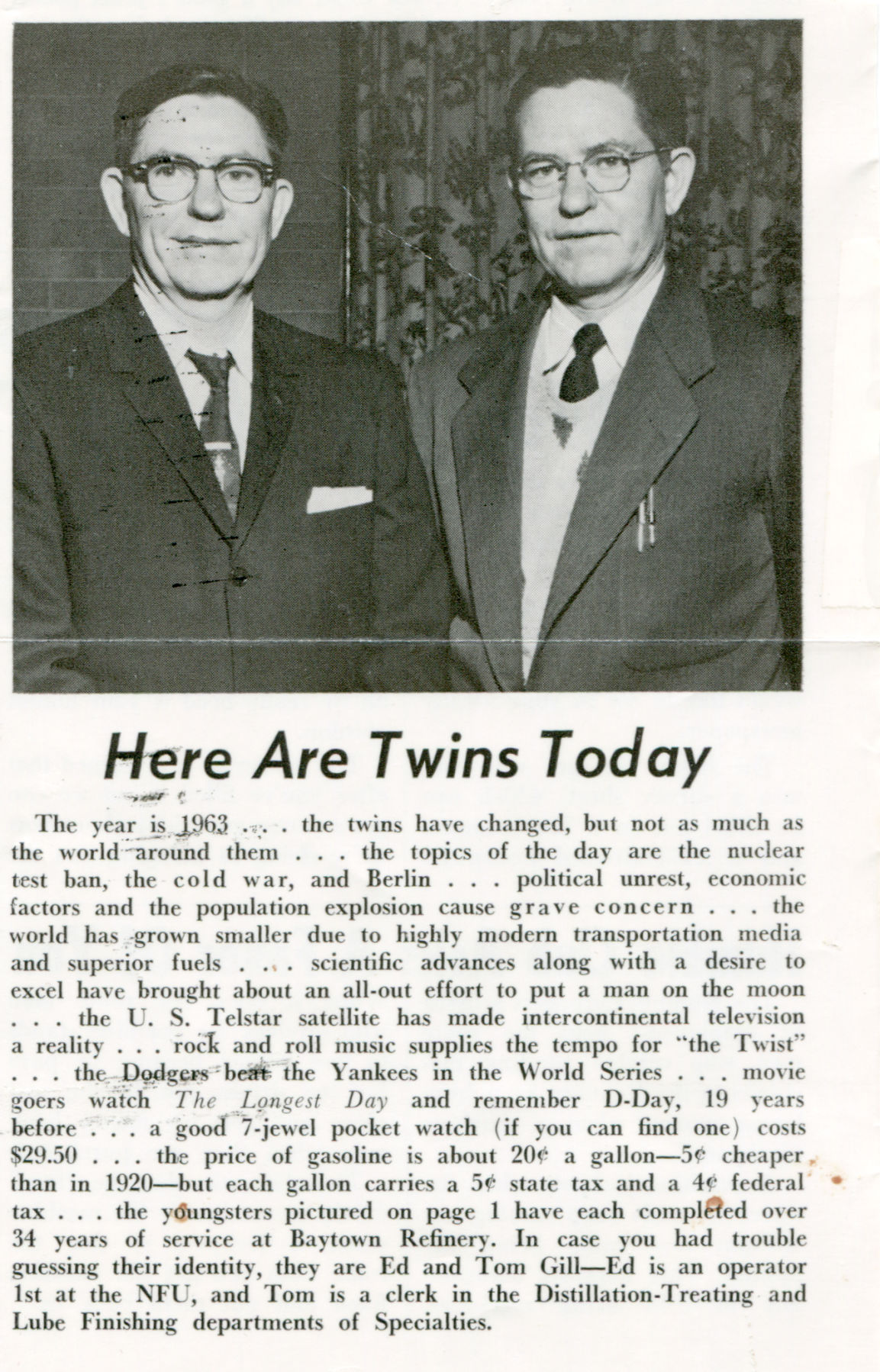 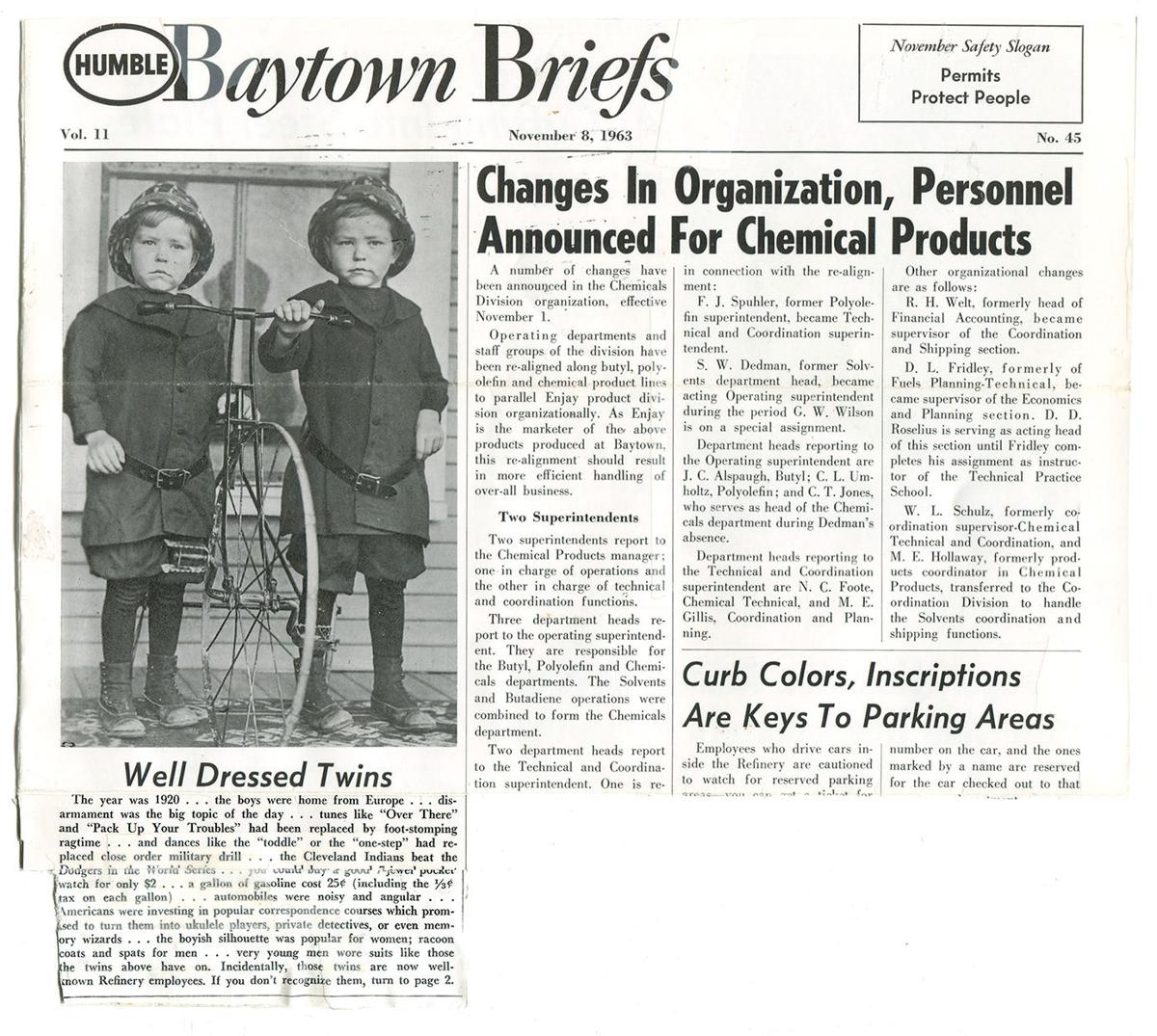 My name is Evelyn Gill Hilton, I am eighty years old and I grew up in Baytown during the 1940s and 50s in the 'family of Humble Refinery' (now Exxon), as my dad, Edmond Presley Gill, so aptly referred to it.  He and his identical twin brother, Thomas Nicholas, two of seven children, were born in 1911 and, sadly, lost their father four years later.  Although terribly poor, they persevered and graduated from Dayton High School in 1927 at seventeen. They began working for Humble Oil Refining Company the same year doing any job assigned to them.  Dad remembered a time during the Great Depression when the company could pay only twenty-five cents an hour.  Most of the men in their ditch-digging crew quit but the Gill Twins, who well remembered what it was like to be hungry and without money, stuck with their jobs.  The Depression finally ended and they never once regretted staying at Humble!

I have many wonderful memories from my growing-up years, which were greatly enhanced by Humble.  Mom, my little sister Susan, and I never questioned that it was the giant hub around which our lives revolved--as far as we were concerned, everyone in and around Baytown worked either for or along side 'the plant'.  It provided sustenance through our dad's income and fellowship for family and friends. When the "Humble Bee" magazine came in the mail every month, Mom always laid it out on the coffee table for all of us to read. Whenever pictures or items about Dad appeared in it--his winning the "Coin Your Ideas" or a humorous article about him and/or Uncle Tom, she proudly left it open for visiting friends and family to read.  Once he even won a 10"x 10" television set--our first one--for a cleaver idea to improve the safety of a valve. The company even sent a photographer to our home to photograph our family watching the amazing new TV!  Of course, the picture appeared in the next Humble Bee.

I particularly remember the Humble Community Building, provided free for Baytown residents, that was constantly in use.  My piano teacher, Mrs. McCulley, held our recital there yearly, because it had a large stage, ample seating and a big, beautiful GRAND PIANO and, next to the big, green building, were the tennis courts where our family played many games over the years.  Every summer numerous employee families spread table cloths on the grounds for the wonderful barbeque picnics and games that Humble provided free of charge. The Christmas parties with Santa and gifts and the many generous academic scholarships provided at high school graduations (I missed getting one by four points) were also highlights in our lives.  Employees were also encouraged to save and purchase Humble stock and often the company matched their shares and, once in a great while, the stock split (doubled).  Can you imagine that!  Dad and his brother, rightly understanding the adage "a penny saved is a penny earned," took advantage of the extraordinary offer and both amassed quite a large amount of stock over the years.  In all of his work years, Dad only missed one week of work and that was due to a pneumonia hospitalization. Without words, his loyalty, pride, faithfulness and honesty were instilled in us, too.  He was a good Christian man, a hard worker whose biggest fault was always seeing the other fellow's point of view.  The only thing I ever remember him firmly insisting on was that Susan and I get college degrees, for which he was happy to pay.  We did and both became teachers and both married teachers.

Ed and Tom knew they were part of something great and important to our country.  During WWII, beginning in 1939 (the year I was born), Humble played a vital role in making gasoline for our planes and jeeps, helping to win the war.  The workers were excluded from the draft due to their important jobs here and it was taken it seriously.  The company provided families with black sheets with which to cover windows in case of an enemy attack and we eagerly complied with their suggestions concerning saving on gas, tires and food.  It became a common thing to see vegetable gardens in neighbors' back yards.

Through the years there were several accidental explosions in the plant. The moms worried and prayed for their husband's safety when these happened.  A friend's dad was killed in one explosion and, though it was tragic, everyone knew the inherent danger of working in an oil and gas plant and accepted the risk.  I do not remember any talk about "suing Humble" or making "them pay."  Such monetary issues were never expressed.  "Our" company did its best to provide a safe workplace and we all were certain of that.

In 1972, Humble Oil changed its name to Exxon and with that change came many others and amazing growth. Today, Exxon is known around the world as one of the largest oil refineries on earth.  It has thousands or workers rather than hundreds and has become a household name in the U.S.A. and in many other countries.  Ed continued his job as 1st operator in the NFU (or Light Ends as it was referred to) while Tom worked in the Distillation-Treating Department.  Tom worked 50 years and Ed, 48.  Upon his retirement in 1975 Ed was presented with big party and a gold watch by the company.

My father, Edmond Presley Gill, went home to be with the Lord and Mom in 2000 at eighty-nine years of age.  He never had his name inscribed on a wall or building and I am sure that he has long been forgotten in the annals of time at Exxon, as has Uncle Tom and those other early, hardy men.  But to me, my sister, our mother and grand children, he was our unsung hero whose name appeared sometimes in the company magazine on our coffee table.  Today a page of the 1963 "Humble Baytown Briefs," the weekly newspaper that accompanied the "Humble Bee," hangs in the foyer of my home.  A familiar picture of Dad and Uncle Tom smiling--Humble's 'Gill Twins'--is emblazoned above an article about two men among many others doing important jobs in a very important company.

It causes me to pause and remember a long-ago time so dear to my heart.

Evelyn Gill Hilton, In memory of my dad.

Should be read by all , amazing historical accounts(verified) with characterizations.

My Grt uncle was postmaster in Pelly Texas(Baytown) in the 20s/30s Humble deserves the credit you give them but you my dear lady are the real Treasure.

in Texas History and of course the Jacques Noir. Thank you again.

I give your book to friends and fellow history folk. God bless

DOCTOR'S OFFICE Receptionist, Bilingual, Computer knowledge, must be able to