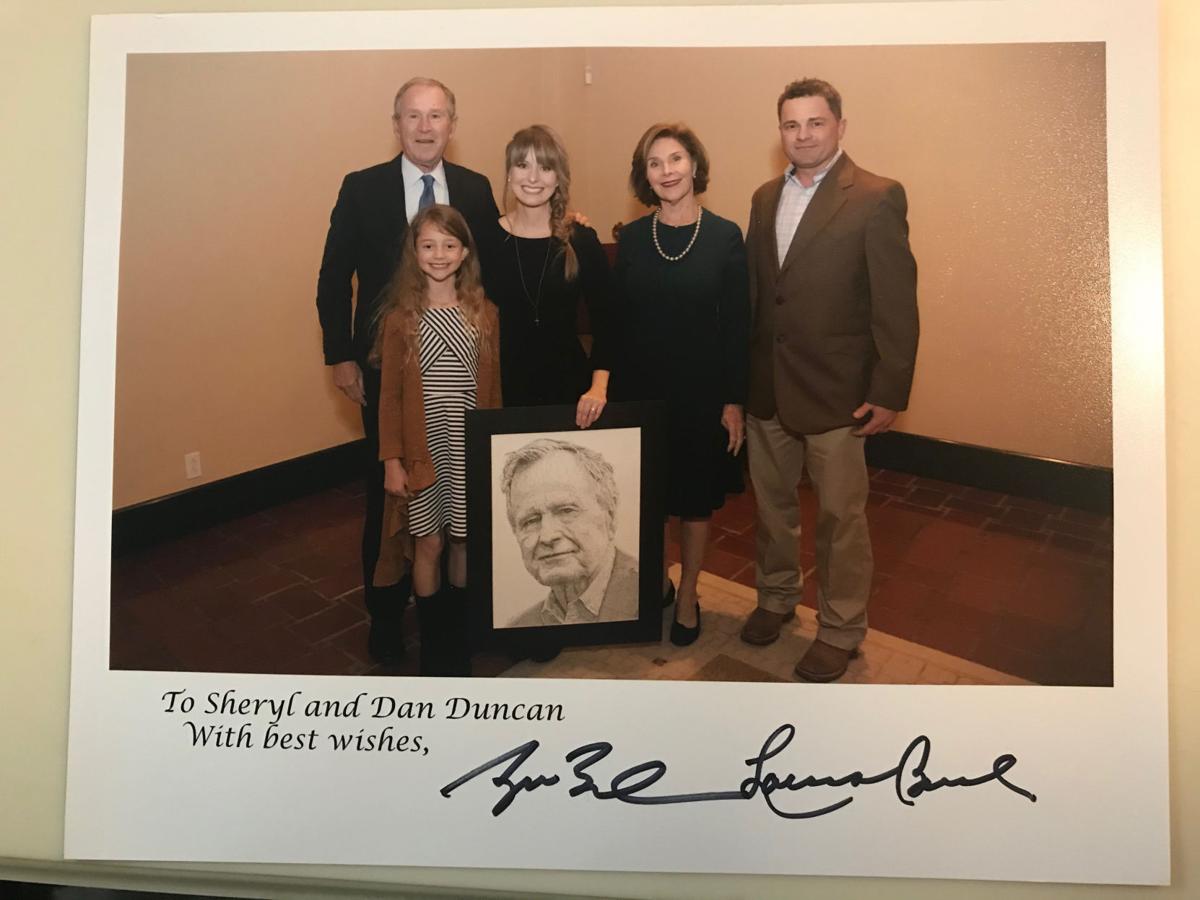 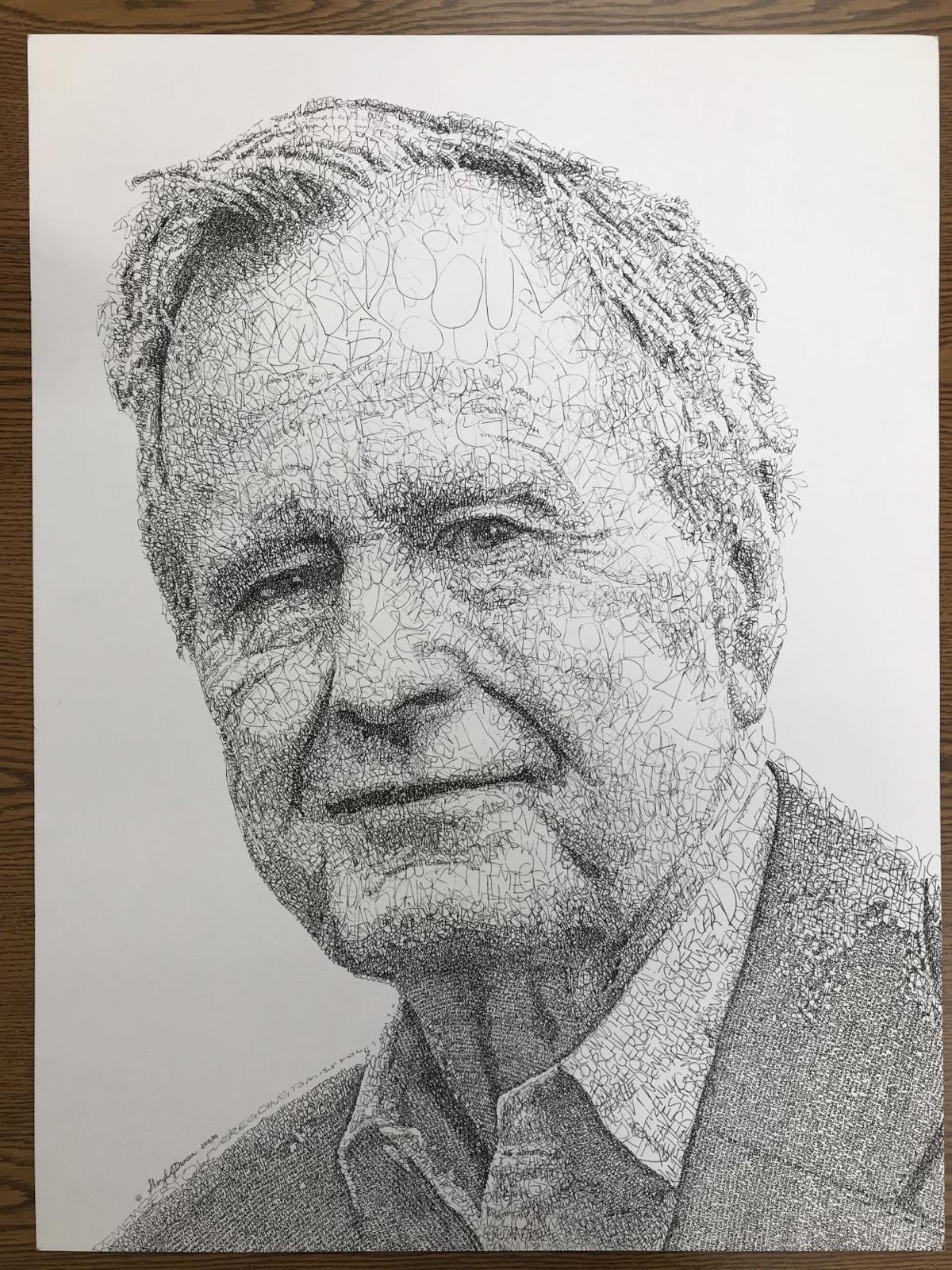 Barbers Hill High School Art Teacher Sheryl Duncan used the words of President George W. Bush in his eulogy for his father to create a portrait that caught the attention of the Bush family. Duncan presented the original piece to the Bush family at a private art showing at the Houston Library.

Barbers Hill High School Art Teacher Sheryl Duncan used the words of President George W. Bush in his eulogy for his father to create a portrait that caught the attention of the Bush family. Duncan presented the original piece to the Bush family at a private art showing at the Houston Library.

Barbers Hill High School Art Teacher Sheryl Duncan remembers the first time she was old enough to vote in a presidential election. Her choice was George W. Bush. As a young adult and artist, she never dreamed she would one day meet the 43rd President of the United States.

Duncan has taught art to students in Barbers Hill since 2008. In recent years, the 41-year-old developed a debilitating spinal tumor that, though benign, leaves her struggling to accomplish simple tasks in near-constant pain. In many ways, her art provides a soothing distraction.

One of Duncan’s favorite art forms is portraiture, though she admits she never created a portrait of a famous person until 2018, when former President George H. W. Bush and First Lady Barbara Bush passed away. Their story captured Duncan’s heart.

She had taught her advanced art students a portrait technique using word art, and she began her own piece, using the words of the elder Bush’s love letters to Barbara.

But Duncan was so inspired by the poignant tribute to the elder Bush by his son George W. Bush during his father’s funeral, she abandoned her first project to create a new one.

“I’ve always admired both of the Bush presidents,” Duncan said. “They were strong and trustworthy leaders for our country, and the words of President [GW] Bush’s eulogy for his dad really moved me.”

“Sometimes pain won’t let you focus on many other things, so it’s nice to have something difficult to work on. It forces you to go somewhere else mentally,” she said.

When the portrait was complete, Duncan wasn’t sure how to share it.

“I always felt that I would give this piece to the Bush family,” Duncan said. “But I had no connection to make that happen.”

She took a photo of the art and reached out to friends and family via Facebook, voicing her desire to share the original with the Bush family. Someone in her network, who is still anonymous to Duncan, made that connection for her. She is deeply grateful for the outpouring of support from each person along that path.

“Former President [GW] Bush’s chief of staff wrote to me in December, after the family saw the print,” Duncan said. “I just cried. They invited my family to attend a private dinner at the Houston Public Library, where former President Bush’s Wounded Warrior art would be unveiled to a few members of the public.”

Duncan and her husband, Daniel, and daughter Lyla Max, attended the event in February, where they met President and Mrs. George W. Bush. Duncan presented the former president and first lady with the original piece of art.

“He was so down-to-earth and complimentary,” Duncan recalled. “He said I had captured the kindness in his dad’s eyes. He even offered to share some additional writings by his dad for the first piece I began.”

The evening was surreal, Duncan said, and one that encouraged and humbled her in many ways.

“I’m someone who needs control, and I’ve had very little of that these past few years with my health,” she said. “To have something that I’ve worked extra hard to accomplish be recognized in such a grand way, it really gives me the courage to get through the next round of challenges.”

Duncan continues to work on the original Bush piece, as well as portraits of Astros players and a portrait of the late Kobe Bryant and his daughter Gianna. Over the years, her work has become a way to help others.

“I’m a perfectionist,” Duncan said, “so details can sometimes drive me crazy. But these projects are amazing therapy.

“Sometimes I get very sad when I’m writing the words,” she said. “But the reason I continue doing them, even though they feel heavy sometimes, is because my Dad told me once that I am helping people to grieve and preserve memories, in a way that nobody else can.”

The K.I.S.S. approach to voting

A strange definition of principles